Fines in a Gamified Classroom 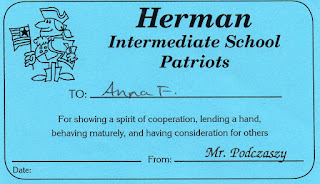 Let me start by stating that I have two separate "but equally important" systems in my gamified classroom. The XP  system, which is tied to the students assignments (blog quests, mastery quests and PBL quests). In the XP system students are awarded initial points after submitting their work, and continue to gain XP as revisions are submitted. In true gaming style, one cannot lose XP. After all, once you have an experience you cannot undo it, you can only make it better. The XP system is shared out to students in my public leaderboards.

I also have a school currency system (we call them Patriot Bucks), which is tied to school and classroom behaviors, and stems from my school's PBIS. Students can earn Patriot Bucks at a staff member's discretion for things like picking up trash, participating in class, or basically any show of positive behavior. Students can use their Patriot Bucks to purchase items at the student store or enter them in weekly raffles. It is important to note that Patriot Bucks are a physical item (slips of blue paper, signed or stamped by the staff member who gave it out), and that no one, except for maybe the individual students, keeps track of them. This is what made it so easy to find a new use for them.

It all started a couple of weeks ago as I wrapping up of Back to School unit, which as in most classrooms involves teaching students the expectations, rules and procedures of my classroom. My students had just passed the Acceptable use Policy quiz, and were eager to get their hands on our classroom devices. I had taught/modeled how to take the devices out of the cart and how to put them away. I had explained how it was important that all devices be plugged (with their own plug) in order for all classes to have enough charge for the day, as well as how to make sure that each device was put in the correct slot. I even had students come up one by one and "show" the class just how to do it. Everything was going well until that first eager student picked up a "random" device (i.e. a device that was not assigned to him). The natural consequence for this is that the student would not have access to devices for at least that class period. But, I did not want to do that since that would mean that I would be the one to come up with something related to the activity, but that did not involve technology. The student in question suggested that he write a letter of apology promising to not do it again. It just so happened that I had just had a conversation with a fellow teacher about something she called the "opportunity log", where students write a reflection on a class misbehavior and promise to do better. I had shared with her that in my experience those almost never work. It is a forced apology, akin to a mother telling her children to "apologize to your brother for ____", only to repeat herself the next day and ask for another apology for the same behavior. I shared that with the student, asking him how many times he had apologized to a sibling without really meaning it. He sheepishly smiled, and stated that just that morning he had "apologized" to his sister, but he had no actual plans for "never doing it again".

At that moment, inspiration hit. I told him that in order to get his device he would have to pay a Patriot Buck fine. We agreed that 20 Patriot Bucks would be appropriate. He went back to his seat, carefully counted and came back to me with a proud look. He had just enough! He placed the "fine" on my desk and asked if he could go get his device. I simply thanked him and told him to get to work. The rest of the class exploded in questions about the "fine" system. For some reason they welcomed the addition of fines and saw it as a perfectly acceptable and fair way to overcome infractions. There were many questions about specifics, "What is the fine for not logging out? What about for forgetting to plug a computer?" It was the little things that bugged them as much as me that in their opinion should warrant a fine. 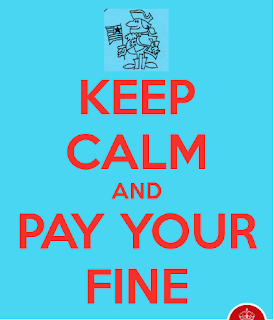 In a surprising turn of events, something else happened once the fines were in place. Students have begun to help each other avoid fines. Instead of simply walking away from unplugged devices (which of course still happen every once in a while), they take the time to plug them in for each other. I've overheard statements of,  "Dude, stop goofing off, that's a 50 PB fine!" This is already pretty cool, but there is more. A new student who did not have enough Patriot Bucks to pay for putting his device in the wrong slot, and who I was ready to excuse from the fine, saw his classmates (students he had just met), pool Patriot Bucks to pay his fine. No prompting at all, simply a spirit of cooperation and doing right by each other.

So far, this system is working beautifully, and I am wondering if you are using something similar. Do you have any words of wisdom to add? I would love to hear from you.

Posted by Mariana Garcia Serrato at 10:38 AM No comments: