Over the last several years educators have worked hard to increase their use of media in the classroom. We have witnessed how students continue to grow their online presence and many different outlets have encouraged us to seek out lessons to teach our students how to be active participants in this environment. If you are like me, you have scoured Common Sense Media and their wonderful toolkits and developed many different digital citizenship lesson sequences to guide your students, using a wide variety of platforms. As you have developed these lessons, you have been learning alongside your students many of the ins and outs of what is appropriate, how to stay safe, etc. You have probably also participated in district-mandated training and even sought out your own professional development in order to stay current with the exponential growth in legislation surrounding student privacy.

Your own depth of knowledge on the subject of digital citizenship comes into play every time you decide what you are going to have your students do to demonstrate mastery in your content area. Your students, as well as most parents, rely on teachers to help them navigate new platforms and tools while staying safe and current in the ever-changing online world. At this point in the summer, you are probably starting to think about what you can reuse, what you can tweak and what to completely overhaul in your lessons to address "fake news", evaluating information and giving proper attribution to content your students may want to use this coming school year.  Some of your tried and true plans may suffer from the disappearance of the specific tools you were using, or you may simply want to strengthen your own knowledge in order to be better prepared to address these topics, but where can you find easy to follow professional development that can help you uncover your own blind-spots?

For me, the answer came in the form of KQEDTeach. I've written about them before, but what you may not know is that not only are they free, but they have recently added several new courses specifically addressing digital citizenship. Each of the courses follows a learn-make-teach cycle, where you are not only given the tools and practice each skill yourself, but you are also encouraged to think about and develop a lesson plan that you can use in the fall to address it with students. If you complete the course and share your lesson plan, you also get a certificate which in many instances can be used to certify PD hours. Win all around!

Finding and Evaluating Information: This course walks you through the ins and outs of finding reliable sources of information and evaluating your search results. There is a whole module on lateral reading that I found particularly useful as I tweaked my original lesson plan to come up with the new "Stop the Fake News Cycle"(to open this link, and all the subsequent following lesson plan links, you will need to register on the KQEDTeach platform).

Safety and Privacy in a Participatory Culture: This course addresses online safety from the perspective of consumers of digital media, the development of your online persona and most importantly, navigating the privacy settings and terms of service of different platforms. After taking this course my whole approach to clicking "I agree" changed, and led to a better iteration of my Digital Citizenship lesson plan.

Understanding Copyright and Fair Use: Not only does this course help you dive more deeply into copyright and fair use and gives you tools to go beyond clicking "usage rights" when teaching this to students, it also provides you with ways to address the proper attribution of several forms of media. After taking this course, I knew that many of my lessons would need to fully address how my students were using media to support their knowledge and led to the inclusion of these concepts in lessons such as the one I used to exemplify how I plan to incorporate this moving forward (Proper Attribution)

Constructing Media Messages: Building upon the previous courses, this course also includes how to deconstruct media to interpret hidden messages and identify biases. The course puts you, and by extension your students, in the role of creators of media. To exemplify the lengths to which advertisers go to spread their message and how images can be manipulated I developed a completely new lesson as a final product for this course entitled Media Fake Out, which though I have not taught, I plan to incorporate at the beginning of the school year.

These are the courses that I've found most helpful under the umbrella of digital citizenship for educators on KQED teach, but as you explore you will also find many others to address media creation in your classroom. There is even one that specifically talks about managing and assessing media projects! As your summer winds down, I invite you to hone your skills and join me on KQED Teach.
Posted by Mrs.Garcia at 10:45 AM No comments: 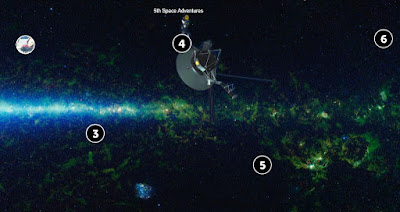 One of the biggest struggles I've had in the whole gamification business has been the narrative aspect of the gamified classroom. As many before me have suggested, a good narrative engages the students and helps drive the game forward. (The importance of narrative in the student-centered classroom - Adam Powley). The narrative gives meaning to the whole idea of why we are collecting points and/or struggling to reach the top of a leaderboard.

As my games have evolved through the years, I've used different themes and attempts at narratives. We've trained dragons, explored idyllic islands and even survived a zombie apocalypse, however, in all of these my narrative has been a secondary consideration, mainly due to not having figured out a way to deliver that narrative consistently. In fact, it was not until the end of the zombie apocalypse (last year) that I re-discovered the mini-videos I had created to accompany the original narrative. In the day to day business of teaching they had been left behind and by then my students had lost interest in the story they had pushed for when we started. They saw the leaderboard and acquisition of privileges as the only end goal of the game, and though this was enough for some of them, for others it became nothing more than "regular" school with a few bells added.

In an effort to remedy this, I started looking for ways to have everything I needed to move the story forward from the beginning. Now, this meant that I needed not only a changeable storyline, a place to hold everything, and a way to hold myself accountable (lest I forget again) but at the same time keep the story hidden from students with enough crumbs so that if I did forget they would ask about it.

The changeable storyline was easy. I had already decided that we would be space explorers giving me the ability to add or remove planets to explore through the different units I teach. Star Trek and its "continuing mission" being the obvious choice for this. You land on a planet, meet a new civilization perhaps capture a couple of aliens in our Boss Battles, and on to the next one. Best part, you can always revisit a planet or remain there longer if needed. With this in mind, and using LunaPic (as illustrated by Mr. Powley in his ClassroomPowerUps blog), I started a Google slide deck to house the complete story. Each slide is a mission log, has a quick recap of events and hints at what's coming next as the ship moves through its assigned sector. The idea is that it would read like a serial comic book of sorts (or like the logs entered by the different captains in the series). 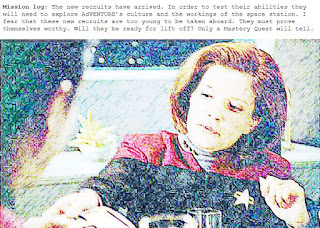 I was busy with this for a few days, but the main issue remained... How could I publish only the portions of the story that have been visited ("the story o far") while letting the students know that there is more to come. After much Googling, I found that there is no easy way to password protect only portions of a slide deck, there are many ways to prevent people from editing, but not from moving forward on a deck. That being the case, I transformed a slide into a Google drawing, and that was strike two. Not only can you not directly password protect the drawing, you cannot open it directly when published to the web, it will always be a download. Not being one to give up, I finally came across a handy tutorial appropriately called "How to Password Protect ANY File in Google Drive" from Flipped Classroom Tutorials, which uses Google Forms' response validation to ask for a password and deliver a link if correct. Although using this, I still had to have individual artifacts for each part of the story, at least now I could hide them in plain sight. 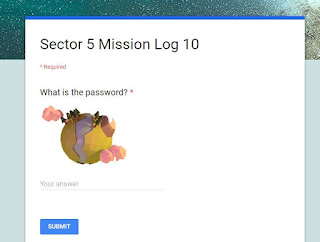 As it usually happens, I got distracted with something else and left this alone for a few days, as the back of my head considered where to house all of this in a way that would be consistent with the space narrative. I considered places like Deck Toys or Symbaloo's Learning Paths which would give this a "gamy" look, but I wanted an even more engaging feel to it that would also not require students to log in to read the logs (other than what they already had with Google). Serendipitously, I came across Roberto Fantini's VR Tour "Space conquest" on Thinglink 360. Now, if you've read my posts before you know that I avoid using paid for stuff, but I have Thinglink premium already so I took it as a sign that this should be an avenue to explore. So I finished up most of the narrative for one grade level (still debating whether we will come back to earth or not) and "remixed" the image to come up with this:

The first "hidden" part of the narrative is item 3, and in case you would like to see the story the passwords are:
3) hydrogen
4) lithium
5) sodium
6) potassium
7) rubidium
8) cesium
9) francium
10) beryllium

The added benefit of this is that I can also add Easter Eggs and links to directed side quests to the narrative slides, or add elements to the story as needed, which gives me the flexibility I was looking for in my narrative.

I am happy with this solution, but wonder whether there is a less time-intensive or totally free way. If you've found it, please share. In the meantime, I' still have to do this for three other grade levels :)

Posted by Mariana Garcia Serrato at 2:16 PM No comments: