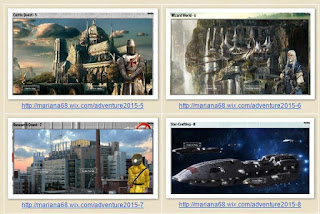 As I am preparing to say goodby to another year of gamifying, I feel the need to write down some of the things that are buzzing in my head, lest I forget them in the summer days ahead. This year completed my year 2 in the gamification arena, and as always some things went well, while others will need a complete rethinking.

This year I worked with four distinct story lines, one at each of the grade levels I teach. They were fun to create, and although the students liked that they each had different avenues, I have to admit that keeping them all working at the same time became rather difficult. I would get ranks and achievements mixed up, and sometimes even directed students to a different story.

As I begin to rethink  and prepare for next year I will be going back to one story line as my main effort, allowing me to also combine some of the other aspects of the gamification experience for my students.

The self-ranking leaderboards are in place and served to keep the kids motivated in continuing with the game throughout the year. At times they are still chore to keep updated, but the kids kept me accountable for doing this, as they did check them often, particularly towards the end of the school year as they were looking forward to achieve the highest rank and obtain lofy perk of "Blog Immunity".

This is also where I think having a single storyline will come into play. During this school year, each grade level had their own leaderboard, ranking system, etc. However, I also published for the students the cumulative class ranking. Students were particularly interested in seeing how each class stacked up against each other, and often asked which students were in the lead. In looking forward, I am considering having the individual leaderboards for each class, but also publishing a "top ten", which will be easier to achieve if all classes are working under the same story.

The structure of the game using the blogs as the primary way to get XP worked well, particularly for my upper graders. For the most part, kids blogged consistently about their learning, and we saw a couple of students reach 100 content-related blog post this year. Including the S&EP (as mentioned in my Gamifying the NGSS post) pushed the students to "think like scientists", and provided me with a tangible way to assess them in their progress towards mastery of the practices.

Although the blog points as XP has worked really well, I am re-considering not using their unit tests, performance tasks and projects within the XP structure. The XP has always been about progress towards mastery, and including them in the XP would allow me to encourage the students to perfect their work. It is an easy fix, but it will require a little work on the back end to make sure the playing field is even in regards to points, particularly since these are tied not only to rank but to privileges as well.

The structure I had in place for obtaining gold coins this year did not work at all. Only three of my 240 students even attempted a cross-cutting "boss battle"(Gamifying the NGSS). When I asked why, the students reported that it was too hard to obtain gold coins, and although I modified the structure several times, by the time the changes came about the students had lost all interest in them.

As I think about next year, I am considering reverting the gold coins back to simple participation points and displays of good citizenship or behavior, instead of tying them to the content. However, I need to figure out a way to keep the management simple. Walking around with an open app (like Class Dojo) or a spreadsheet has never worked for me. I guess I could create some tokens...

Other gamification things to explore

Escape Rooms:
Recently I attended the Deeper Learning conference, and participated in an Escape Room experience. I think this has great potential for the gamified classroom, and I invite you to visit some of the things I've found regarding their use in education:
Ms. Casa-Todd's Escape Room
Ms. Pollock's EduEscape
Ms. Magiera's EscaperoomEdu

Choose your own adventure videos:
A year ago, my daughter showed me the Interlude tool and I remember thinking how well it could be integrated into a gamified classroom. This video creation tool allows you to design, create and publish an interactive video with relative ease, providing you with a way to enhance your gamified classroom with "choose your own adventure" videos. Unfortunately I forgot all about it until a couple of days ago, and I am sharing it here in case one of you gamifiers wishes take it on as a summer project.
Posted by Mrs.Garcia at 11:32 AM