Teach students to "Take Over the World" 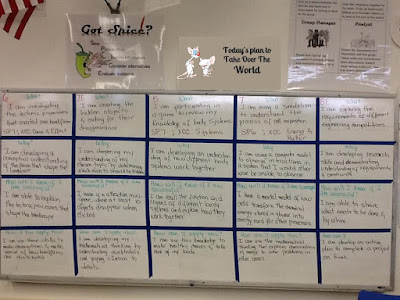 It all started as a bit of a classroom joke. As most days, students entered and at least one asked "So, what are we doing today?" My usual response up until then would be to direct them to the board where I, as many of us do, had already written down objectives and an agenda. However, on this particular day the question triggered a childhood memory. Was it the timber of that student's voice? Maybe. I just know that the theme song for Pinky and the Brain song popped in my head, which inspired me to state, "The same thing we do every day... Try to take over the world!" The student giggled, and took his seat. The next day, he asked again, and I said the same thing. By the third day, my agenda board morphed into a "Today's Plan to take over the World" board. This soon became our classroom mantra, and has often helped me frame the day's lesson as my "Plans" started to include:


All of this was fine and good. The kids got a kick of asking every day, and smiled as I responded the same way every time.


Enter Nick into the classroom, one of those bright students that often push your pedagogy forward. As we repeated the same questioning about taking over the world, he raised his hand and asked that all important question, "Mrs. Garcia, exactly how are we supposed to take over the world?" Fortuitously, I had just read an article on Edutopia describing Costa and Kallik's Habits of Mind, and in that magical moment it came full circle. I was not able to identify all 16 habits of mind for Nick on that day, but I remembered enough to say "Well, you would need to persevere and think creatively. You cannot take over the world if you give up or if you do the same thing as others are doing, right? So, let's get started with our lesson for today." We went about our business that day, but by the next day, I had done more reading, printed out some art for my walls and even developed a slide deck identifying each of the habits.


I tabled my science lessons in favor of a lesson entitled "How to Take over the World". We went over each of the habits of mind, and I encouraged the students to not only discuss each one as they were presented, but also to find examples of the habits they were already practicing. We had conversations about practicing to get better at soccer and at playing a videogame, the difference between hearing and listening and how they apply knowledge to new situations, amongst others. The students were able to see that the habits of mind we were talking about could guide us in our ultimate goal "To Take Over the World".

The moment has since past, but we have constant reminders in our Plan Board, the posters I hung on the walls, and the slide deck (which I turned into a screensaver for our classroom devices). Since then, the habits of mind are ever present in the conversations between myself and the students, "I see that you checked your work a couple of times. You are on your way to take over the world.", and between the students themselves, "How are we going to take over the world if we do the same thing as everyone else!"

And that, my noble readers, is how I know my students are getting ready to take over the world. I invite you to joint the conversation by posting your questions or comments.
Posted by Mariana Garcia Serrato at 5:24 PM