FLUXX MOD Project - Board Games in the Classroom

Although I am not affiliated with FLUXX® (or Looney Labs) in any way, I think that FLUXX® is a great game that everyone should own. 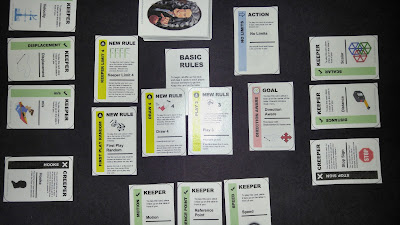 We often think of board games as a staple for Family Fun Night, and because many of them help teach soft skills and facilitate higher order cognitive abilities, teachers routinely incorporate classics like Monopoly, Risk, Scrabble and Apples to Apples in their classrooms. By the same token, creating MODs or skins for existing games is a time-honored classroom activity. A simple Google search will bring up a plethora of "create your own board game" classroom projects. For those of us that have tried it, we see it as an opportunity to review content, both as the game is being created or modified and while the students play them during those extra-long rainy day recesses.

A couple of years ago, my own children introduced me to a great little game called FLUXX® - The card game with the ever-changing rules. The game was very easy to learn and portable which made it a staple for my family. Over the next few months, we purchased several versions happily bringing them out as part of our game repertoire.

Not long after that, I started toying with the idea of not only sharing it with my students but also having them create MODs for it to play in the classroom since the gameplay itself is based on reaching a goal of paired concepts. This makes it super efficient in helping the students revisit concepts, while at the same time allowing for some deeper thinking about the relationship between ideas. For example, in FLUXX's original version one of the goals is Rocket Science, which "needs" Rocket and Brain on the table to win.

After a little refining and tweaking of the idea, I set about creating a project page with directions, templates and of course a rubric for my middle school students. I introduced the project on a Monday, and gave them two weeks to come up with their skins.

Of course, there were some students that did not know what I was talking about, which made me realize that before anything else happened, we needed to play a couple games of FLUXX. After a couple of rounds, and some more clarifying of where to find the "big ideas" and how to keep track of their paired goals so they would not repeat them, I had them get into groups (of 4) and choose a topic for their MOD.

Students took to this creative form of review in a way I had seldom seen otherwise. They loved the idea of coming up "funny" titles for their goals and were seen scouring textbooks and notes to figure out how they could pair ideas that at first glance may not have been obvious. In one of my favorite examples, a group that developed a Newton Motion FLUXX Mod, included Robert Hooke as a creeper.


Here is the full set of "Newton Motion" cards in case you want an example for students:

I have run this project now several times, and I am always amazed not only at the cards they create but also by the enthusiasm that they show whenever I declare "it's review time", and bring out stacks of student-created FLUXX decks.

For obvious reasons all of my students' FLUXX decks are science related (Motion, Evolution, Genetics, Matter, etc.) However, I can easily see FLUXX decks for novel studies, American Revolution, and even Linear Equations. In case you missed it above and are interested, here is a link to the Instructions and Templates that I share with my students.

If you try this, let me know. I would love to know how it went for you and your students.
Posted by Mariana Garcia Serrato at 8:09 PM